Skip to Content
Home Putting policies back into politics

Finally UK Politics is moving back to being about policies .

I can’t quite remember when it became ‘Americanized’ (please say this with a twang in your voice) ; but at some point in the last 10-15 years the ‘Spin Doctors’ took over and politics became about slagging off the other parties for what they weren’t doing and ‘Americanizing’  (again, remember the twang) body language.

Everyone became a puppet.  Someone somewhere told them (I think this started with Tony Blair) to pause_after_every_word; to keep their hands and arms in an open posture and gesticulate in an up and down motion to the rhythm of their voice; to open their top button to be ‘down with the people’; to use “street speak” to mirror the youth as it would gain their trust… to quote Ed Milliband “Hell Yeah” that really worked out well.  All politicians in all parties lost all credibility and most of the voting population.

Welcome Jeremy Corbyn.  I’m not a Labour voter myself, but thank you JC.  Real policies which you are prepared to stand behind; your own mind; your own words and your own clothes…. and no stupid hand gestures.  Phew It was beginning to look like aliens had taken over the House.

How many other people never, ever , ever watch PMQT?  But I did (on catch up) yesterday.  I think this new era of politics will engage voters.  We will have a Socialist Left and a Corporate Right and a space for Liberalism in the middle.  And, with a little luck, hopefully nowhere for the extremist Britain First, UKIP,  to seep in.

We must always remind ourselves that in the scheme of the universe, life really is all a bit of a joke and we must always take time to laugh at ourselves. Life is short.  Be kind to each other. Enjoy the ride.

Or we might just end up with egg on our face! 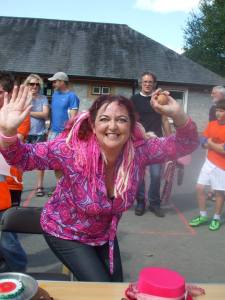