Skip to Content
Home Love & Relationships What happens to the magic when your kids stop believing?….

When our son was five we got up in the middle of the night (with him in tow obviously ..) and got in a taxi to the airport.  From there we took the Santa special to Lapland, where we drank in an ice hotel, rode on dog sleighs, and ventured into the frozen forest to find Santa in his cosy cabin. It was a magic moment, Santa gave him a gift, which was a different Action Man to the multitude of Action Men he already had in his vast collection.   How did Santa know he loved Action Man and that he’d not got this one? (Even i was impressed my that I have to say!).

After some hot chocolate and food we sped back across the frozen lake on a skidoo back to the plane.  The pilot thought he had seen Santa and the reindeer practicing their take-offs and landings so all the kids were glued to the windows trying to catch a glimpse .

Then we were home again.

On the big night that year as in the previous and the subsequent, we tracked Santa with the help of NASA, noting where he had already been and how many presents they thought he had already delivered. Most importantly , how long before he arrived with us!

We’d put milk and carrots outside the back door for the reindeer.  Quality Street and Ribena for Santa (we didn’t want him to get too tipsy before he’d finished his nights work).  The reindeer always spilt some of the milk.  Santa never managed to eat all the chocolates… but who could blame him, mince pies, biscuits and chocolates in every house… he’d eat one or two and take a sip of his drink.

One year our son was amazed ‘look mummy Santa’s used the same wrapping paper that you had last year!”…close call that one.

That magical trip to Santa’s home cemented his belief in Santa beyond that of his friends with elder siblings and those who had never really met the ‘real’ Santa, (just his helper Santa’s who covered the stores and streets taking messages on the run up to Christmas).

One teary afternoon at school pickup a couple of years later my son had a disagreement with a lad who tried to tell him Santa didn’t exist.  He was so frustrated and angry at that boy. 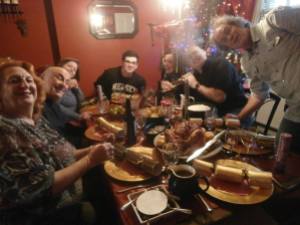 Of course over the next year or two the Tooth Fairy and Easter Bunny became games we played rather than reality.  A tooth under the pillow meant a shiny coin in the morning.  and to this day we still have an Easter Egg Hunt (he’s 19, but he and his friends insist!).

I fretted and became quite anxious about the day he would ask if Santa was made up.  In my mind I over-analysed the potential damage I had done to him through ‘lying’. I over talked it with my hubby and it became quite a nuisance in my mind.  Then I worried and fretted that he was the only one who still did believe and was arguing vehemently with those who disagreed.  I became concerned he’d be ridiculed or bullied.

Of  course none of my fears played out.  The doubts about Santa crept in slowly, we kept playing the game, he kept pretending because he thought if he didn’t he might not get gifts!  And anyway it was FUN.  Eventually the conversation had to happen.

I told him that whilst Santa himself isn’t real the ‘magic’ really is.  The fact that everyone plays along  and joins in the fun makes it pretty amazing.  NASA has Santa tracking software for Christs sake!  The pilot on the aeroplane that time had been in on it.  All the adults, all the older brothers and sisters all played along to make it special.  Never mind the fact that families all got together and had a lovely time together; charities raised extra money; humanity showed itself to be altruistic and generous; empathetic and caring to the wider community.  All of that goodwill and kindness; all of those stories and symbols made for a pretty spectacular kind of human magic.

OK so these days we don’t put out carrots and milk or chocolates and ribena.  And we don’t have to keep sending him back to bed because its only 5am, 5:30am, 6am… In fact for a few years through his early teens it was hubby and I knocking on his door asking if we could go down for a fry up and to open presents!  These days we have a wonderfully leisurely morning on Christmas Day. Then, whilst dinner is cooking, we take a stroll to our local pub where the community gathers for a pint and to wish each other a merry Christmas.  Sometimes in the village square there are carols on horse back with riders in tinsel handing out song sheets to the families milling around.  Then its home; a couple more pressies; a few drinkies and then a late lunch/early tea. A Christmas festive bonanza. Usually with at least some members of the family are with us; always with a spare place set to remember those who can’t be with us.  Later its board games, laughter, phone calls, drinking, more present opening (we do tend to take our time).

It truly is a magic time.  Sometimes it happens several times in the year.  With family spread far and wide and parents getting older by the year (as they do), we might have several mini Christmases in several locations over the coming weeks.  For some years, for hubby’s parents , we held a special Christmas during their visit to us in May… seeking out a tree and putting up some decorations,  ensuring we had crackers left over so we could pull them with lunch.. and of course Christmas dinner, with all the trimmings, presents and board game playing.  Yes, magic indeed.

Just because something isn’t real, doesn’t necessary make it any less valuable or meaningful.  For our family at least, the magic which was passed to us, has been handed down to our son. One day, he will be adding little traditions of his own to create a unique magic for his own family….

In the meantime, don’t worry about your kids as they grow.  I don’t know why I worried about scarring our son when he discovered I’d been “lying”.  I never felt scarred by my parents.  My own magic and enjoyment of Christmas has continued to grow as additional practices get added to our family traditions. so on the run up,  I shall very much look forward to this coming Christmas; to the extra effort we all make to touch base with our friends afar; to the arrival of family members; and the spending of extra time with friends.

Merry Christmas, Happy  Festivities, Goodwill, peace and kindness to you all

See you next year xxxxx 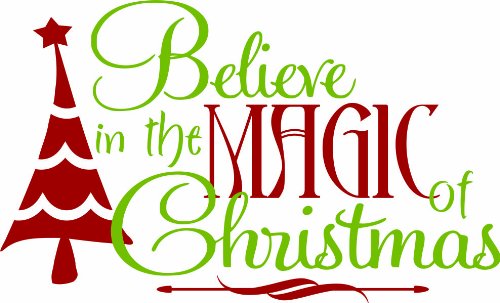